Skyrocketing U.S. home prices are quickly shifting the affordability calculus for prospective homebuyers in 2021 — even though mortgage rates have remained near record lows.

Despite average 30-year mortgage rates that have remained below 3% for most of 2021, the rapid home price increases are eroding affordability for average wage earners. Even with an average 30-year fixed rate mortgage of 2.84% in August, the 14.9% home price increase translated into a monthly mortgage payment of $1,179 on a median-priced home — not including property taxes and insurance.

Homes remain much more affordable in 2021 than they were during the home price runup in 2005 and 2006, but the seven-month trend in deteriorating affordability is starting to gradually slow demand. Home sales in August decreased 1.5% from a year ago, the first annual decrease following 13 consecutive months of increases.

Demand for housing is primed to deteriorate further based on the latest consumer sentiment survey findings from the University of Michigan.  Only 29% of those surveyed in September 2021 said now is a good time to buy a home, down from a recent high of 63% in March to the lowest level since 1982. That means Americans are more bearish on buying a home than they were during the home price crash following the 2008 recession.

The University of Michigan survey also asks consumers why they think now is a good time — or not — to buy a home. In the most recent month with data available on that follow-up question, 66% surveyed said that it was a bad time to buy a home because prices are too high, up from just 12% who said prices were too high in July 2020.  Meanwhile only 19% said it was a good time to buy because of low interest rates, down from 44% in July 2020.

Renovated Inventory to the Rescue

Despite the rapidly deteriorating affordability, there is some hope for homebuyers in the form of renovated homes: properties that have been rehabbed into move-in ready condition after being purchased at foreclosure auction or bank-owned (REO) auction.

After renovation, these homes sold for 28% below the average sales price of all existing home sales nationwide, according to an Auction.com analysis of nearly 100,000 homes that sold on its platform between 2018 and 2020.

On average, the price of the renovated properties was 3.5 times the median income in the surrounding Census tract, according to the analysis, which incorporated tract-level median income data from the Federal Housing Finance Agency (FHFA). That was markedly more affordable than the price-to-income ratio of 4.9 for all existing home sales nationwide.

The analysis also suggests that most distressed property buyers are performing extensive rehab before reselling, and that most renovated homes are being resold to owner-occupant buyers. Resales were an average of 258 days (nearly nine months) after the original purchase, indicating significant time spent on rehab. The resales sold for 100.4% of estimated “after-repair” value, indicating they were rehabbed into move-in condition. Among nearly 52,000 homes that resold after being originally purchased on Auction.com, nearly 37,000 (71%) were resold to an owner-occupant.

Auction.com buyer Steve Johnson purchases and renovates distressed homes in Georgia and Tennessee. His goal is to keep the resale price of his renovated properties at $129,000 or lower so that they will still be affordable for low- and middle-income buyers.

“Typically Auction.com is (selling) foreclosures. Those properties typically need rehab,” said Johnson, who said that he purchased and rehabbed 36 properties in his first three years of real estate investing after retiring from his full-time job. “And I’m able to, with some people who work with me, to go in and do the rehab. I bring up the property to a much higher standard. … And then provide it to an end-user at a discount.

“It sure feels better to help people own a home ,” Johnson added. 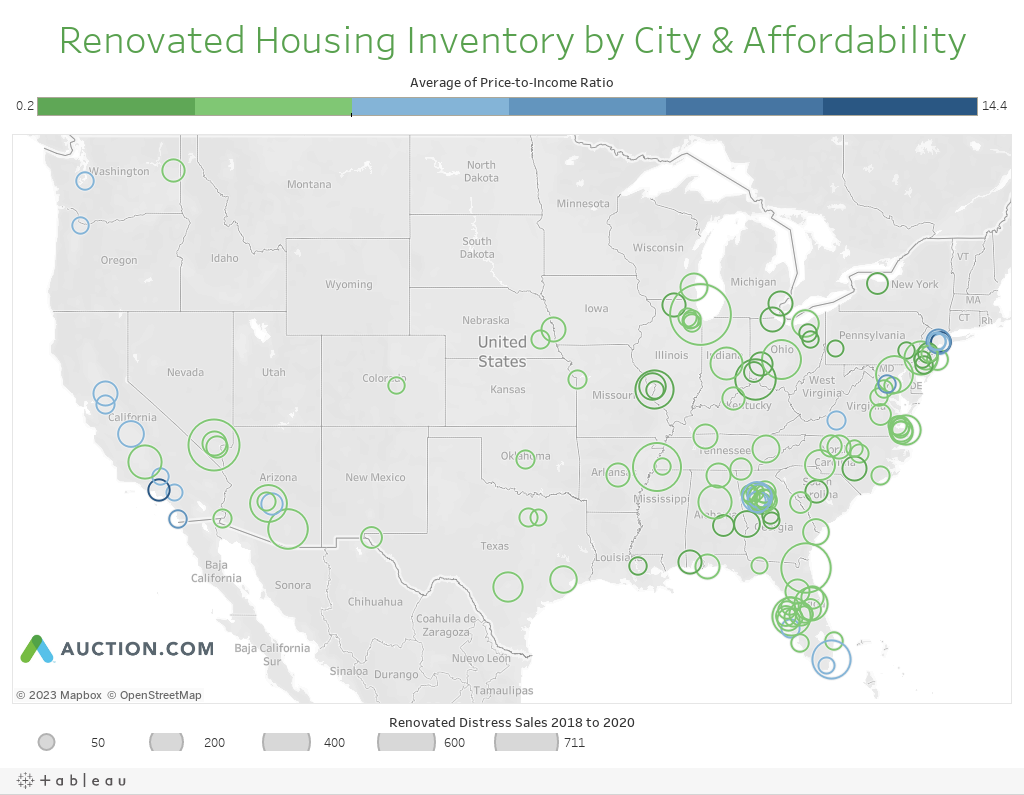